Use the Jira Pack to sync information between Jira and Coda.

Written by Zac Ooi
Updated over a week ago

This article covers how to make edits to Jira issues using building blocks from the Jira Pack. If you are not familiar with the Jira Pack or Packs generally please consult the linked articles.

Getting Started (Signing into Jira)

Getting Started (Signing into Jira)

First, they all rely on having your account set up with the Jira Pack. So you'll need to be signed into your Jira account before trying to use the buttons! You can also go back and add your account if you have already set up the buttons without signing in.

Second, for each of the building blocks you'll need to pass through an issue link or issue key, e.g. PROJECT-123. This tells the Jira Pack which issue you are specifically trying to update. For the Create Issue button you'll pass through a Project instead since there isn't an issue yet.

If you're working in the Issues table from the Jira Pack you can use the formula thisrow.Issue.Key to easily pass through the right Issue on a row level. Here is an example from the Update Issue button:

You can create brand new issues in your Jira projects with Coda by using a button. You can add this button to a table or to the canvas of your document. You'll need to specify the type of issue depending on how your team has setup your project (e.g, "Story" or "Issue") and a summary (i.e, what the issue is.) 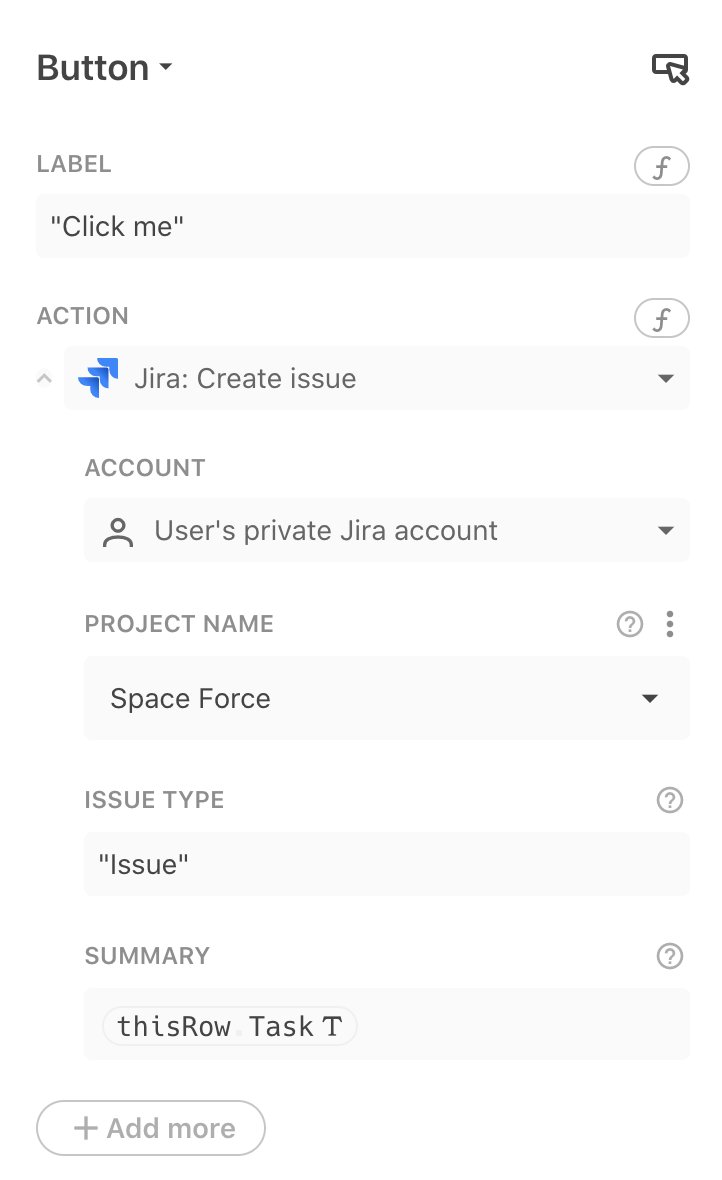 The Update Issue and Update Issue with Lists buttons let you edit multiple fields in a Jira issue in one click.

If you’re looking to update a single issue or update the same fields across a number of issues (e.g. update all issues’ summary and priority in a table), use Update Issue. It takes pairs of fields and values; representing the new value of the given field. In the below example, we use the formula to update the Summary field to have a new title.

For custom fields, you will need to designate the field in the form customfield_[id] where ID is the ID number for the custom field from Jira. This can be found using the steps in this article.

Use Update Issue with Lists if you’re updating a set of fields that may change by button press, e.g. you want to only push specific fields that have changes. This is a more advanced function and can be used to only push select edits to the data and thus ensure you don’t overwrite or corrupt other data in Jira. To use it, create a comma-separated list of fields and values (or, use the List() formula!). Here's an example:

Update Assignee and Update Priority function similarly, albeit only for those fields. Again, you will need to input the values as text.

The below tables reflect which fields from Jira are supported by Coda.

Read refers to the ability to pull in the associated field from Jira.

Write refers to the ability to push edits from Coda to Jira. 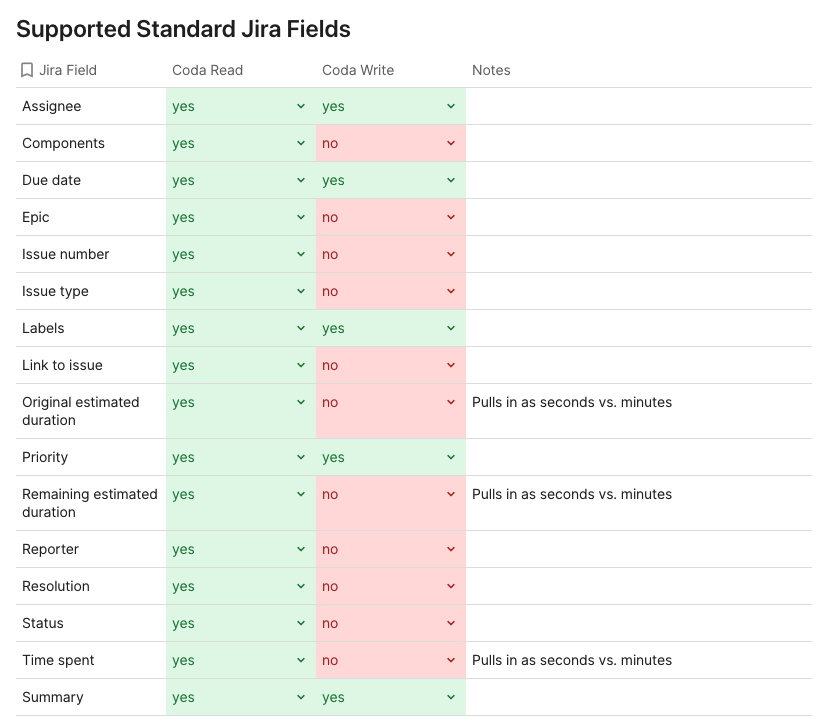 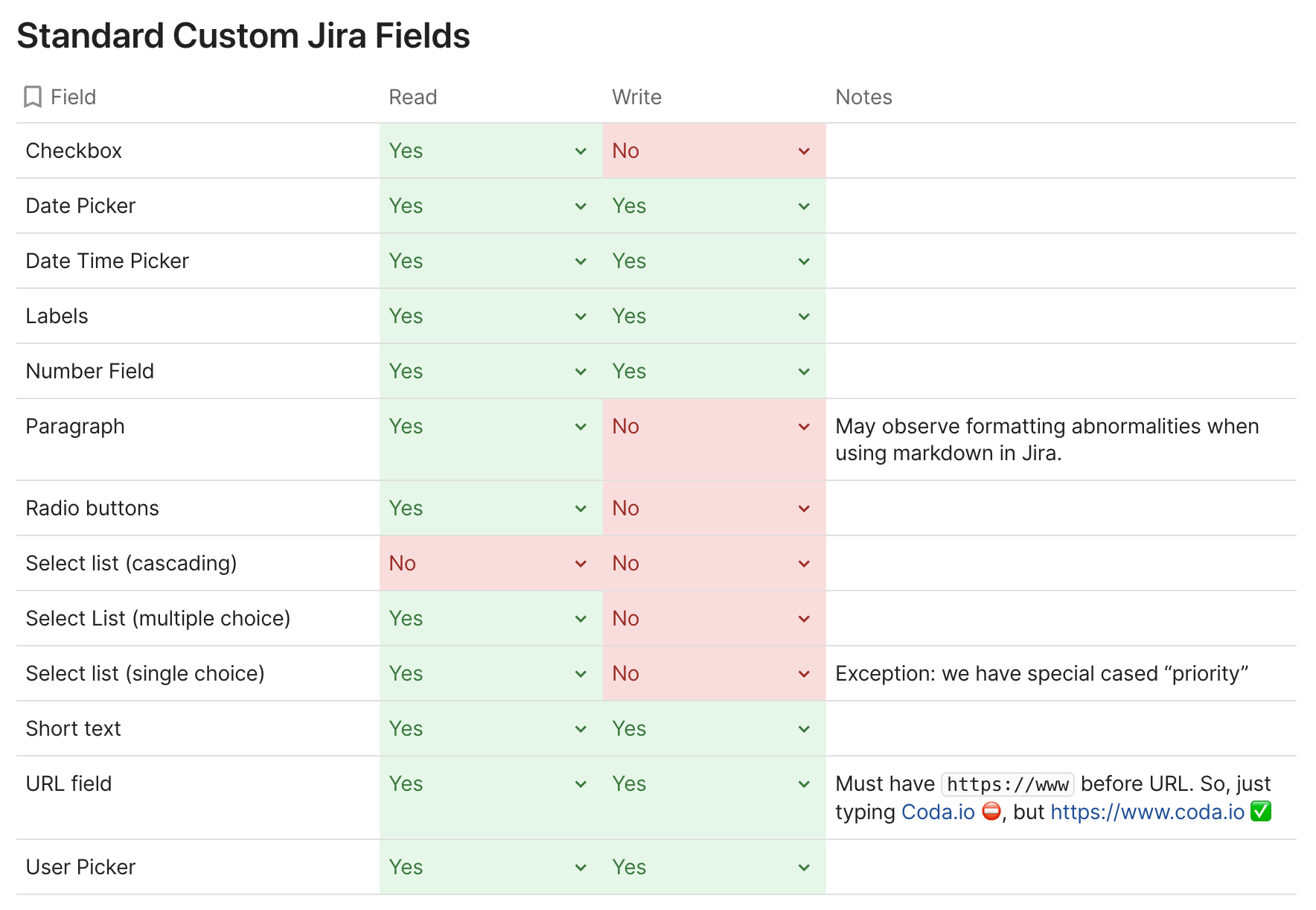 Interested? Explore some great Jira Templates in the Coda Gallery.